REASONS FOR JUDGMENT AND JUDGMENT

[1]               This is an appeal under section 56 of the Trade-Marks Act, RSC 1985, c T-13, as amended, (the Act), of the decision of the Registrar of Trade-Marks (the Registrar) dated December 10, 2010, to expunge the trade-mark LAZIZA & Design (the Trade-mark) registered as TMA323,215 in association with “canned fava beans”, further to a section 45 proceeding initiated by Convenience Food Industries (Private) Limited (the respondent) against Clic International Inc (the applicant), who is the owner of the Trade-mark.

[3]               On December 5, 2010, the Registrar issued a notice requiring the applicant to furnish an affidavit or a statutory declaration showing, with respect to each of the wares or services specified in the registration, whether the trade-mark was “in use” in Canada at any time during the three year period immediately preceding the date of the notice (the relevant period). Section 4 of the Act provides that a trade-mark in association with wares is deemed to be “in use” where at the time of the transfer of the property in or possession of the wares, in the normal course of trade, it is marked on the wares themselves or on the packages in which they are distributed or it is in any other manners associated with the wares that notice of the association is then given to the person to whom the property or possession is transferred.

It is well established that the purpose and scope of s. 44 [now section 45] is to provide a simple, summary and expeditious procedure for clearing the register of trade marks which are not bona fide claimed by their owners as active trade marks. The procedure has been aptly described as one for removing “deadwood” from the register [...] The Registrar’s decision is not one that finally determines substantive rights but only whether the trade mark entry is liable to be expunged under s. 44 or not. If use is relied on then the evidence filed in response to the notice must “show” the use or at least sufficiently relate the facts from which such use can be inferred. Mere statutory tracking in the nature of a bare statement that the registrant was currently using the trade mark in the normal course of trade in association with the wares is insufficient to establish use unless coupled with facts that are descriptively corroborative of the same. Evidence of a single sale, whether wholesale or retail, in the normal course of trade may well suffice so long as it follows the pattern of a genuine commercial transaction and is not seen as being deliberately manufactured or contrived to protect the registration of the trade mark. Evidence in response to a s. 44 notice should be forthcoming in quality, not quantity, and there is no need nor justification for evidentiary overkill.

[5]               In response to the section 45 notice, the applicant filed the affidavit of Mr. Antoine Kassas, the applicant’s Executive Vice-President, with samples of labels that were affixed to the cans of the beans marketed in Canada during the relevant period. An illustration of one such sample is reproduced below: 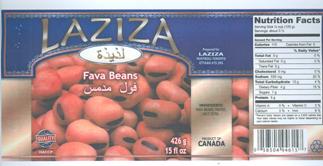 [6]               The applicant readily admitted before the Registrar that the trade-mark in use depicted certain modifications compared to the original version of the disputed Trade-mark, characterized by the word LAZIZA (the word portion) and the palm trees in a circle design (the design portion), but contended that the modifications were not substantial and should not affect its rights on the disputed Trade-mark. The applicant argued that the only dominant feature of the Trade-mark is the word portion, LAZIZA, which being of a foreign language, annihilated any likelihood of confusion in the minds of consumers as to the source of the wares sold in association with the Trade-mark.

[8]               It is not disputed in the present case that no additional evidence has been filed with the Court and both parties agree that the applicable standard of review is that of reasonableness. Counsel for the parties submit that the question is whether the Registrar’s impugned decision is supported by reasons that can withstand a “somewhat probing” examination and is not “clearly wrong”, to use the words of the Supreme Court in Mattel Inc v 3894207 Canada Inc, [2006] 1 SCR 772 at para 40, citing, with approval, Molson Breweries, a Partnership v John Labatt Ltd, [2000] FCJ 159 at para 51.

[10]           The applicant submits that the evidence of use required in a section 45 proceeding needs only to satisfy the Registrar, on a relatively low threshold, that the registered trade-mark is still in use. The applicant contends that the changes depicted in the modified version of the Trade-mark amount to no more than “cautious variations” that are permitted by the jurisprudence as far as the dominant features of a trade-mark are maintained and the differences are so unimportant as not to mislead an unaware purchaser (Promafil Canada Ltee v Munsingwear Inc, [1992] FCJ 611 (FCA)).

[11]           The applicant contends that the Registrar erred in deciding that the absence of the palm trees design would change the identity of the Trade-mark. In this sense, the applicant notably refers to Alibi Roadhouse Inc v Grandma Lee’s International Holdings Ltd, [1997] FCJ 1329, wherein this Court held that the use of the word ALIBI with a bold underline constituted use of the registered trade-mark ALIBI BAR & Grill & Design, the word Alibi being the dominant element in both marks. The applicant also relies on Eva Gabor International Ltd v 1459243 Ontario Inc, [2011] FCJ 27, in which this Court held that the use of XTS – VIRTUAL REALITY (without the original square shaped frame) did constitute use of the registered trade-mark VIRTUAL REALITY & DESIGN.

[12]           The respondent submits that in the case of composite word and design marks, evidence of use of the word portion alone is insufficient to show use of the trade-mark as registered. Accordingly, the Registrar could reasonably decide that the applicant’s registration only protects the Trade-mark that includes both the word component and the design component. The respondent maintains that this ruling is in line with the case law, notably Bierrsdorf AG v Becton, Dickinson and Co, (1992), 44 CPR (3d) 151, wherein it was decided that the trade-mark consisting of letters “B-D” in a box design constituted use of  the registered trade-mark originally consisting of “B‑D” incorporated in a maple-leaf design.

[13]           Having considered the impugned decision in light of the totality of the evidence, the Registrar’s findings and ultimate conclusion are not unreasonable. I fail to see any error of law by the hearing officer, and the reasons in the impugned decision are transparent, provide a rational basis to expunge the Trade-mark, and constitute a defensible and acceptable outcome. This is not the role of this Court to re-weigh the evidence that was before the Registrar. The conclusion made by the hearing officer that the design portion of the Trade-mark is also an essential feature is a conclusion of fact which is supported by the evidence, and which was reasonably open to the hearing officer whether the sample illustrated in the Registrar’s decision was cropped or not.

[14]           The Registrar applied the correct test being that of the unaware purchaser’s ability to identify goods having the same origin (Canada (Registrar of Trade Marks) v Cie International pour l’informatique CII Honeywell Bull SA, (1985) 4 CPR (3d) [CII Honeywell]). Besides the word LAZIZA, the Registrar could reasonably decide that the palm tree design was also an essential feature of the Trade-mark, by which it can be recognized, and that could not be protected if it was no longer in use during the relevant period as defined by subsection 45(1) of the Act.

[15]           The Trade-mark as used by the applicant and the Trade-mark as registered differ more than in petty details and it is rather hard to characterize the differences as “unimportant”. In the case at bar, the evidence filed by the applicant clearly shows that in relevant period, the Trade-mark has only been used in a modified version that not only does not contain the original palm trees in a circle design, but also is in part characterized by the Arabic characters in an oval design appearing under the word LAZIZA, giving it rather a different look. The font of the word LAZIZA in the samples is also quite different from the font of the actual Trade-mark. Thus, it was not unreasonable on the part of the Registrar to have decided that such modification departed from a “cautious variation” of the Trade-mark.

[16]           The applicant also takes issue with the Registrar’s statement that “Clic decided to obtain protection not only in the word LAZIZA but in combination with a palm trees design”, contending that the Registrar erred in considering that the applicant could have filed an application to cover a word version of its Trade-mark if it wished to protect its rights in the use of the word LAZIZA. In the applicant’s view, this goes beyond the issue to be determined in a section 45 proceeding. This argument is not convincing. As it appears in the impugned decision (notably at paragraph 26), this was not the test applied in practice by the hearing officer to decide whether the Trade-mark was in use during the relevant period. As part of the reasoning, the comment made by the hearing officer was simply meant to justify or explain the reasonable conclusion that it was only in combination with the palm trees design, and not unreservedly, that the applicant obtained protection for the word LAZIZA as it appeared in the disputed Trade-mark.

[17]           The applicant finally argues that despite the modifications, consumers still continue to recognize and associate the Trade-mark with the applicant’s wares (affidavit of Mr. Antoine Kassas). Justice Pratte in CII Honeywell, above at para 408, however, specifically mentioned with regard to section 45 proceedings, that “the problem to be resolved is not whether CII deceived the public as to the origin of its goods. It clearly did not. The real and only question is whether, by identifying its goods as it did, CII made use of its trade-mark “Bull”. This question must be answered in the negative unless the mark was used in such a way that the mark did not loose its identity and remained recognizable in spite of the differences between the form in which it was registered and the form in which it was used”. In this case, the Registrar did not err in answering the question in the negative.

[18]           In view of the above, this appeal should be dismissed. At the hearing, counsel agreed that costs should follow the result of the appeal and that a lump sum of $3,000 should be allowed to the winning party.

THIS COURT’S JUDGMENT is that the appeal is dismissed. Costs in the amount of $3,000 are awarded in favour of the respondent Convenience Food Industries (Private) Limited.

CONVENIENCE FOOD INDUSTRIES (PRIVATE) LIMITED and THE REGISTRAR OF TRADE-MARKS