REASONS FOR ORDER AND ORDER

… was in use in Canada in association with each of the registered wares by means of its display on their packaging and that the sales of these wares occurred during the material three year period in the registrant’s normal course of trade.

Given, in particular, the expertise of the Board, and the “weighing up” nature of the mandate imposed by s.6 of the Act, I am of the view that despite the grant of a full right of appeal the appropriate standard of review is reasonableness.  The Board’s discretion does not command the high deference due, for example, to the exercise by a Minister of discretion, where the standard typically is patent unreasonableness (e.g. C.U.P.E. v. Ontario (Minister of Labour), [2003] 1 S.C.R. 539, 2003 SCC 29, at para. 157), nor should the Board be held to a standard of correctness, as it would be on the determination of an extricable question of law of general importance (Chieu v. Canada (Minister of Citizenship and Immigration), [2002] 1 S.C.R. 84, 2002 SCC 3, at para. 26).  The intermediate standard (reasonableness means, as Iacobucci J. pointed out in Ryan, at para. 46, that “[a] court will often be forced to accept that a decision is reasonable even if it is unlikely that the court would have reasoned or decided as the tribunal did”.  The question is whether the Board’s decision is supported by reasons that can withstand “a somewhat probing” examination and is not “clearly wrong”: Southam Inc., para. 60.

[8]               There is only one issue in this appeal: Did the Hearing Officer come to an unreasonable conclusion in finding that the registered Trade-mark had been used by the Registrant on packaging during the relevant time period?

Section 4(1) of the Act defines what qualifies as a use of a Trade-mark:

[10]           The Respondents filed as proof of their use of the 273 Trade-mark, the affidavit of Fares Jarawan. The key paragraphs of that affidavit stated:

Al-Rifai, in its normal course of trade, is an importer, distributor and seller to retailers and wholesalers of all types of coffee and roasted or otherwise processed nuts.  The items that have been manufactured in and/or imported to Canada and sold to retailers and/or wholesalers in Canada during the past three years, and indeed since August 1998 in association with the trade-mark Al-Rifai Roastery (Mahmasat) are “coffee and roasted or otherwise processed nuts”.

The trade-mark Al-Rifai Roastery (Mahmasat) is advertised in the marketplace to obtain distributors and franchisers.  Attached hereto and marked as Exhibit “G” to this my Affidavit is a copy of a point of sale advertising.

Each sale to retailers or to wholesalers is confirmed by an invoice.  Attached hereto and marked as Exhibit “H” to this my Affidavit are various invoices dated in 2002 and 2003.

[11]           Exhibit “D” is a photograph of boxes in a warehouse. For ease of reference it is attached as Annex A. Each label, on the boxes, is shown in enlarged format in Annex B.

[13]            The pertinent question before the Hearing Officer was whether the 273 Trade-mark was in use in association with “coffee and roasted or otherwise processed nuts” during the relevant time.

a.       to establish a transfer of property, there must be evidence of sales of the wares bearing the Trade-mark on the wares itself or on the packages; and

By s.44 the Registrar is not permitted to receive any evidence other than the affidavit and his decision is to be made on the material therein.  The allegations are not subject to the crucible of cross-examination and contradictory affidavits are prohibited.

These circumstances, in my view, place upon the Registrar a special duty to insure that reliable evidence is received and that a bare unsubstantiated statement of use is not acceptable and an allegation which is ambiguitas patens in an affidavit renders that affidavit equally unacceptable.

I agree that the boxes do not show the trade-mark exactly as registered.  The words ROASTERY and MAHMASAT appear below the word AL-RIFAI in smaller print, and they themselves are separated by the word BRÛLERIE.  It is possible that consumers might respond to AL-RIFAI simpliciter as being a trade-mark and consider the remaining words to be descriptive matter.  I must consider though whether the mark is used in such a way that it has not lost its identity and remains recognizable in spite of the differences between the form in which it was registered and the form in which it is used.  As stated in Registrar of Trade marks v. Compagnie Internationale Pour L’Informatique CII Honeywell Bull Société Anonyme et al., 4 C.P.R. (3d) 523 (F.C.A.) at 525, “The practical test to be applied in order to resolve a case of this nature is to compare the trade mark as it is registered with the trade mark as it is used and determine whether the differences between these two marks are so unimportant that an unaware purchaser would be likely to infer that both, in spite of their differences, identify goods having the same origin.”  I conclude that this is the case.  The key components of the registered mark, the three words AL-RIFAI, ROASTERY and MAHMASAT, have been retained and the French equivalent of “roastery”, namely BRÛLERIE, has been added.  Given the intent and purpose of s.45, I believe that the difference is not so significant as to warrant expungement. [see Promafil Canada Ltée v. Munsingwear Inc., 44 C.P.R. (3d) 59, Alibi Roadhouse Inc. v. Grandma Lee’s International Holdings Ltd., 76 C.P.R. (3d) 326, and a Nightingale Interloc Ltd. v. Prodesign Ltd., 2 C.P.R. (3d) 535]

Regarding the requesting party’s questioning of what the packaging looked like in the relevant time period, I refer to the unreported November 24, 2005 decision in the s.45 proceedings regarding registration TMA367415, wherein Senior Hearing Officer Savard stated at page 7, “The requesting party has argued that the evidence does not show that this was the case during the relevant period.  Although I agree that Mr. Bérubé could have been more specific I am prepared to accept on a fair reading of the affidavit that the trade-mark was so displayed during the relevant period.”  I believe that a similar approach can be applied to the present evidence.

Given the indication in some of the exhibits that Wake-Up (sic) Coffee is the distributor, I am not concerned by the appearance of its name on the invoices. [Manhattan Industries v. Princeton Manufacturing Ltd., 4 C.P.R. (2d) 6 (F.C.T.D.)]  The invoices cover a variety of coffees and nuts and typically list a single entity as both the party sold to and shipped to.  The registered trade-mark does  appear near the top of the invoices, as do a number of other trade-marks.  However, it is not clear that such display of the mark at the top of the invoice qualified as use in accordance with s.4(1), which requires that the mark be so associated with the wares that notice of the association is given at the time of the transfer of the property in or possession of the wares.  In a similar fact situation in Shapiro Cohen v. Norton Villiers Ltd. (2001), 16 C.P.R. (4th) 573 at 575, Senior Hearing Officer Savard made the following comments:

I am therefore not prepared to find that the invoices show use of the trade-mark in accordance with s.4.  I do however accept the invoices as evidence that corroborates Mr. Jarawan’s statement that relevant sales occurred during the material time period.

[18]           Here the affidavit is vague and imprecise. As proof of transfer of property in the ordinary course of trade of wares bearing the 273 Trade-marks, photographs of boxes in a warehouse and sales invoices were offered. The affidavit and the photos do not reveal the following:

a.       When the photos in question was taken, i.e. within the three year period or more recently;

[19]           As for the invoices, the Hearing Officer herself rejected them as evidence of use. She accepted them as corroborative evidence that sales of the wares took place during the relevant time.  While I do not dispute that they corroborate sales, they in no way establish that the wares sold bore the 273 Trade-mark.  They only establish that a company called Wake-Cup Coffee Depot Inc. sold coffee during the relevant period and that Wake-Cup Coffee Depot Inc. displayed the 273 Trade-mark on its invoices. As such, they are of no help to the Respondents.

[20]           It escapes me how a ‘fair reading’ of the affidavit sheds any light on the main requirements of establishing use as set out in section 4(1) or how the invoices corroborate such use. Accordingly, I cannot find that the Hearing Officer came to a reasonable conclusion.

THIS COURT ORDERS that: 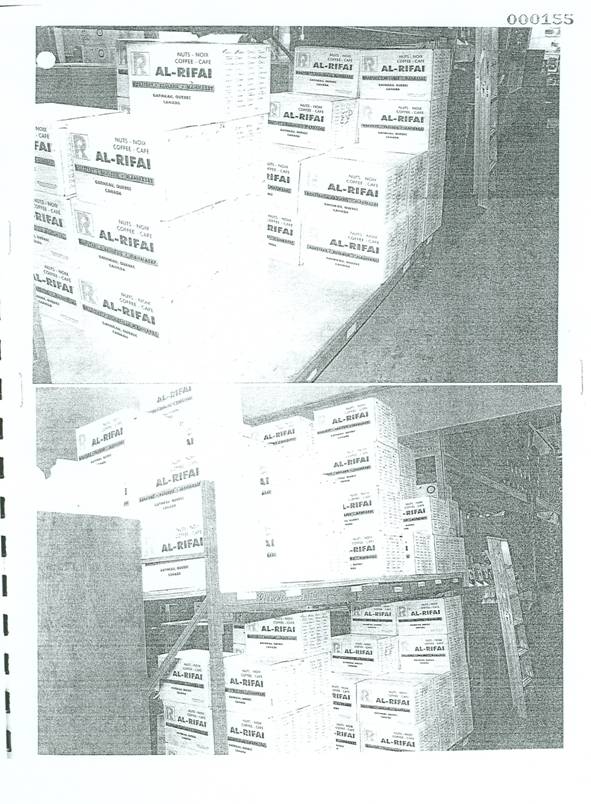 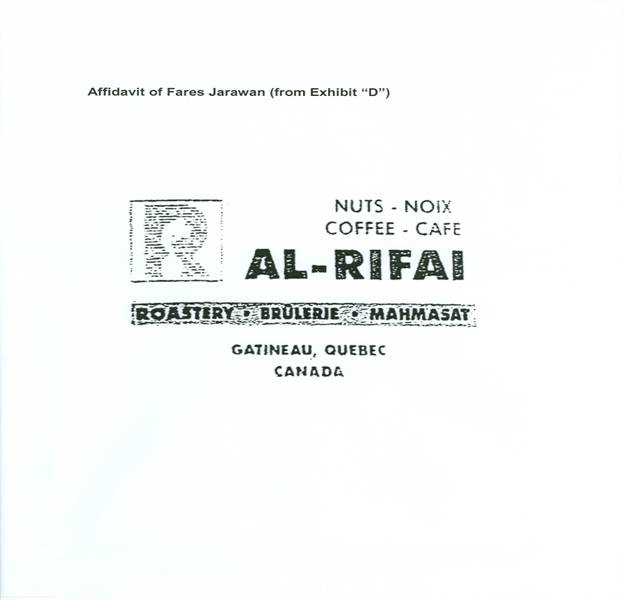 NAME OF COUNSEL AND SOLICITORS OF RECORD